Alzheimer’s disease (AD) is an incurable disease that affects most of the 47 million people estimated as living with dementia worldwide. The main histopathological hallmarks of AD are extracellular β-amyloid (Aβ) plaques and intracellular neurofibrillary tangles (NFTs) composed of hyperphosphorylated tau protein.  In recent years, Aβ-immunotherapy has been revealed as a potential tool in AD treatment. One strategy consists of using single-chain variable fragments (scFvs), which avoids the fragment crystallizable (Fc) effects that are supposed to trigger a microglial response, leading to microhemorrhages and vasogenic edemas, as evidenced in clinical trials with bapineuzumab. The scFv-h3D6 generated by our research group derives from this monoclonal antibody, which targets the N-terminal of the Aβ peptide and recognizes monomers, oligomers and fibrils.

In this study, 3xTg-AD mice were intraperitoneally and monthly treated with 100 μg of scFv-h3D6 (a dose of ~3.3 mg/kg) or PBS, from 5 to 12 months of age (-mo), the age at which the mice were sacrificed and samples collected for histological and biochemical analyses. During treatments, four monitoring sessions using magnetic resonance imaging and spectroscopy (MRI/MRS) were performed at 5, 7, 9, and 12 months of age. MRI/MRS techniques allow, in a non-invasive manner, to draw an in vivo picture of concrete aspects of the pathology and to monitor its development across time. Compared with the genetic background, 3xTg-AD mice presented a smaller volume in almost all cerebral regions and ages examined, an increase in both the intra and extracellular Aβ1-42 at 12-mo, and an inflammation process at this age, in both the hippocampus (IL-6 and mIns) and cortex (IL-6). In addition, treatment with scFv-h3D6 partially recovered the values in brain volume, and Aβ, IL-6, and mIns concentrations, among others, encouraging further studies with this antibody fragment. 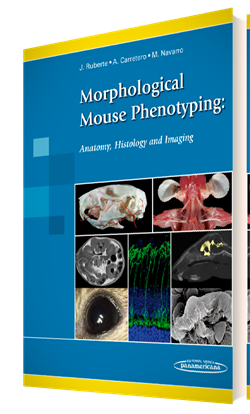 An extraordinary atlas of mouse anatomy which includes more than 2,200 original images over 600 pages to show the anatomy, histology and cellular structure of mouse organs. This book attempts to provide an overview of the different levels of morphology of the mouse, ranging from gross anatomy and topographical anatomy (to explain the relative position of the organs and structures of a particular body region) down to the microscopic anatomy. Imaging technologies used for that include magnetic resonance imaging (MRI), computed tomography (CT), ultrasonography, angiography, X-ray, and electron microscopy. Also, classical anatomical techniques such as conventional dissection, skeletal preparations, vascular injections, histology and immunohistochemistry have been employed to characterize the mouse morphology.

All MRI images included in this book were acquired at our NMR facility (SeRMN, Universitat Autònoma de Barcelona) in a 7 Tesla Bruker BioSpec spectrometer.